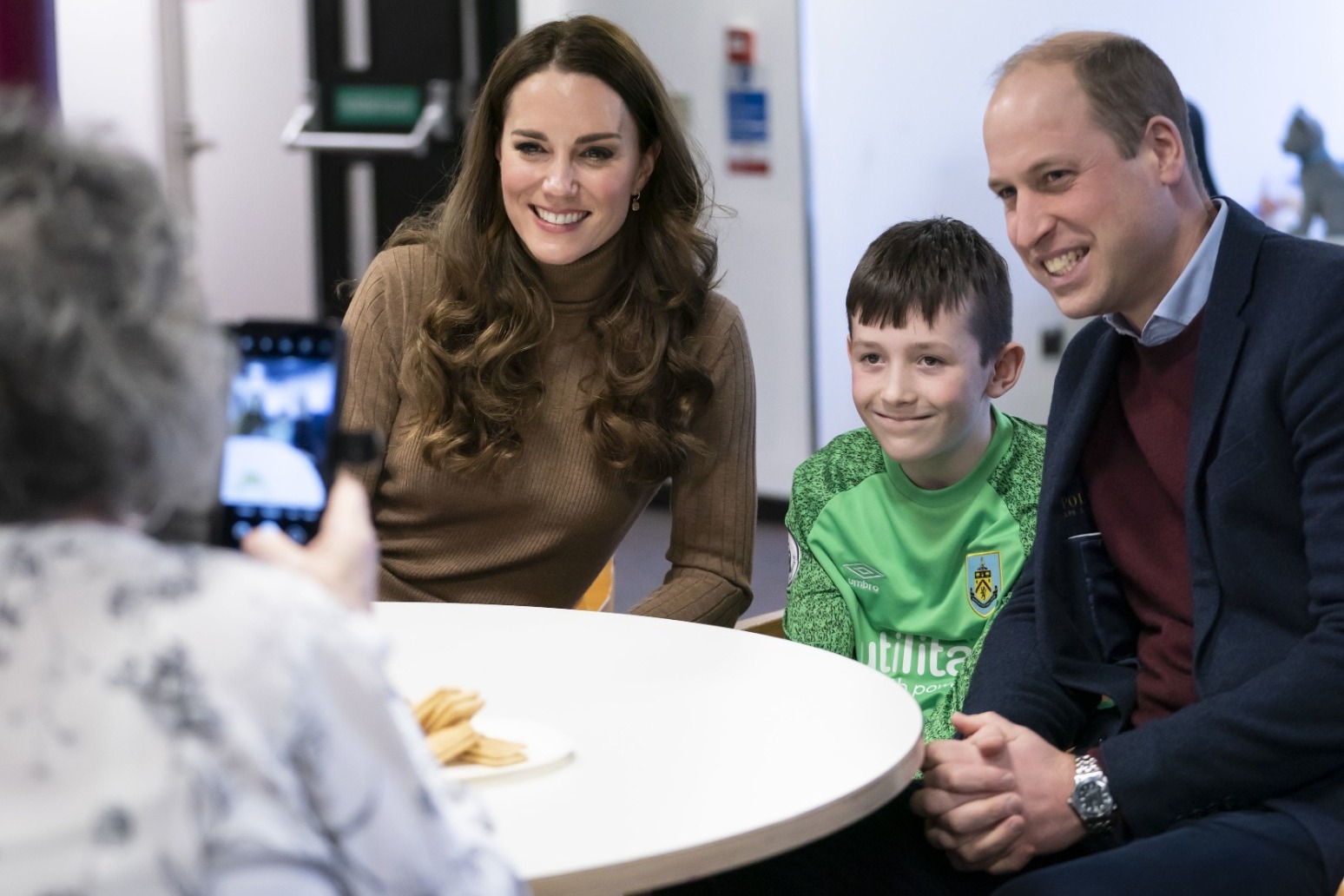 The Duke of Cambridge has sympathised with a grieving schoolboy during a visit to a centre helping vulnerable people, telling him things will get “easier”.

William, who lost his mother, Diana, Princess of Wales in 1997, when he was 15, told Deacon Glover, 11, “I know how you feel”, after learning his mother, Grace Taylor, died last year aged 28.

Putting a hand on Deacon’s shoulder, William said: “It gets easier.”

The duke and duchess spent about 15 minutes talking to the schoolboy and his great-grandmother, Carole Ellis, during a visit to Church on the Street in Burnley, Lancashire, a centre that helps people struggling with poverty, homelessness, addiction or other problems.

In a lighter moment they posed for pictures with families and Kate found herself holding a three-and-a-half-month old baby girl.

She cooed at Anastasia Barrie while standing beside her parents Trudi, a volunteer, and Alastair Barrie, who is on the centre’s committee.

William, looking at his wife gazing at the baby, said: “Don’t give her any ideas,” to laughter. “You can’t take her with you,” he told his wife, smiling.

The royal couple had asked to visit the centre, housed in a former gym, after watching a BBC television report in December about its work with Burnley’s most vulnerable people during the coronavirus pandemic and finding it “very moving”.

William, 39, an Aston Villa fan, chatted to the 11-year-old schoolboy about football, but the youngster, who was wearing a Burnley shirt, seemed unimpressed at first.

“He thought it was a footballer coming here so he was gutted when he found out it was William and Kate,” one volunteer at the centre said.

But gradually he became chattier, as William asked him about Burnley’s prospects and pointed out that his father, the Prince of Wales, had come out as a supporter of the club after directing some of his charities to work in the town.

“I only found out a few years ago that my dad is a Burnley fan,” he said.

He told Deacon and his great-grandmother that he hoped his own children would follow him in supporting Aston Villa. “I need to spread the love a bit,” he said.

William and Kate went to Burnley after seeing television reports about the work of Pastor Mick Fleming, who set up Church on the Street in 2019 to help the homeless and disadvantaged living in Burnley and surrounding areas.

Since then the project has grown and the Church, housed in a former gym, now offers refuge and a safe space for anyone struggling, including those with mental health problems.

Funded by donations, it provides a food bank, clothing bank, hot showers, laundry, a cafe, recovery groups, addiction and mental health support, access to a qualified counsellor, and a safe space for up to 200 people at any one time.

Pastor Mick, who leads church services, said he hoped the visit would help provide extra support for the people using his services.

“They said they’d seen a BBC report on what we were doing and they’d found it very moving.

“I’m very grateful because hopefully it will mean more people will get to know about what we are doing and more people here will get support because of their royal highnesses coming here.

“We rely on donations and we don’t charge a penny for our services.”