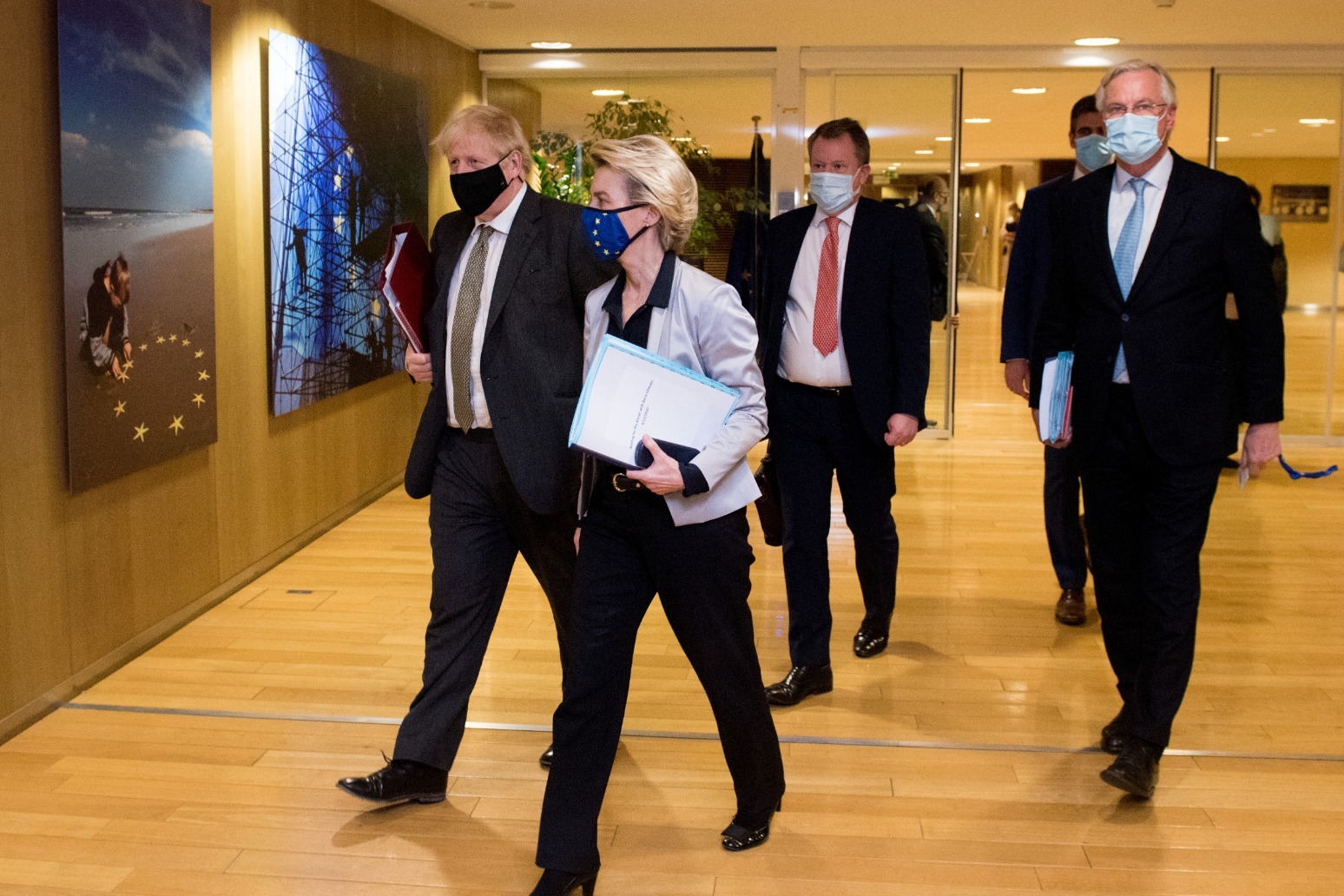 The UK has fired a warning shot to Brussels over no-deal after readying Royal Navy boats to patrol its fishing waters as negotiations enter their final 48 hours.

Four 80-metre armed vessels have been placed on standby to guard British waters from EU trawlers in the event that there is no new agreement on fishing rights after December 31 when transitional arrangements end.

The confirmation of the move by the Ministry of Defence (MoD) comes as Boris Johnson and European Commission president Ursula von der Leyen warned on both sides of the Channel that a no-deal outcome looked more likely than an agreement in the trade negotiations.

On Friday afternoon, Mr Johnson met senior minister Michael Gove, who has responsibility for Brexit planning, and other officials to “take stock” of Government plans for a no-deal exit.

It follows reports that German chancellor Angela Merkel and French president Emmanuel Macron rebuffed the Prime Minister three times this week after he made attempts to speak to them directly about the stalled trade discussions.

Fishing has been one of the most contentious issues in the negotiations with the bloc, with France reportedly unhappy with the UK’s proposals for reducing quotas for EU skippers and a short implementation period.

Reciprocal access to each other’s waters will end next year but the two sides are at odds over what will replace the current terms, which the UK fishing industry has long argued leaves them short-changed.

Brussels has called for the status quo on fishing rights to continue for 12 months in the event of no-deal – a request that appears to have been rejected after the Government revealed plans to scale up patrols.

According to the Times, ministers are set to beef up patrol powers by bringing in legislation to allow the Navy to board foreign vessels and arrest fishermen if there is no agreement, in scenes reminiscent of the 1970s Cod Wars.

The Guardian reported that the four Royal Navy boats readied for fishing surveillance are river patrol vessels which are armed with machine guns – although the newspaper said there was no expectation shots would need to be fired.

Conservative MPs have been urging the Prime Minister to ensure that UK waters would be properly protected in the event of the talks collapsing.

Shrewsbury and Atcham MP Daniel Kawczynski tweeted: “In the event of no deal with EU on Sunday we must receive absolute guarantee from Boris Johnson that British naval forces will be deployed from January 1 to prevent illegal French fishing in our waters.”

The MoD said the deployment of the boats had been agreed as part of planning for the end of the transition period.

A spokesman said: “The MoD has conducted extensive planning and preparation to ensure that defence is ready for a range of scenarios at the end of the transition period.”

The Daily Mail reported that Wildcat and Merlin helicopters were also being placed on standby to assist with surveillance of the country’s territorial coast.

The move is likely to be read in Brussels as a shot across the bows as negotiators knuckle down in a bid to secure an agreement this weekend after Mr Johnson and Ms von der Leyen agreed a firm decision was needed on the talks by Sunday.

Chief negotiators Michel Barnier and Lord Frost are set to talk throughout the weekend in Brussels.

Speaking to reporters on a visit to Blyth in Northumberland, Mr Johnson said fishing and a so-called level playing field “ratchet” that would tie the UK to future EU standards were the two major stumbling blocks to a deal.

He said: “There is the whole issue of fish where we’ve got to be able to take back control of our waters. So there is a way to go – we’re hopeful that progress can be made.

“But I’ve got to tell, that from where I stand now, here in Blyth, it is looking very, very likely that we will have to go for a solution that I think would be wonderful for the UK, and we’d be able to do exactly what we want from January.”

Labour leader Sir Keir Starmer, using the Prime Minister’s own words from 2019 against him, told the Mirror that collapsing the negotiations with Brussels after promising to “get Brexit done” at the general election would represent a “complete failure of statecraft”.

Earlier on Friday in Brussels, Ms von der Leyen said the UK and EU had “not yet found the solutions to bridge our differences” on fisheries.

The Commission president urged the Government to “understand the legitimate expectations of EU fishing fleets built on decades, and sometimes centuries, of access”.