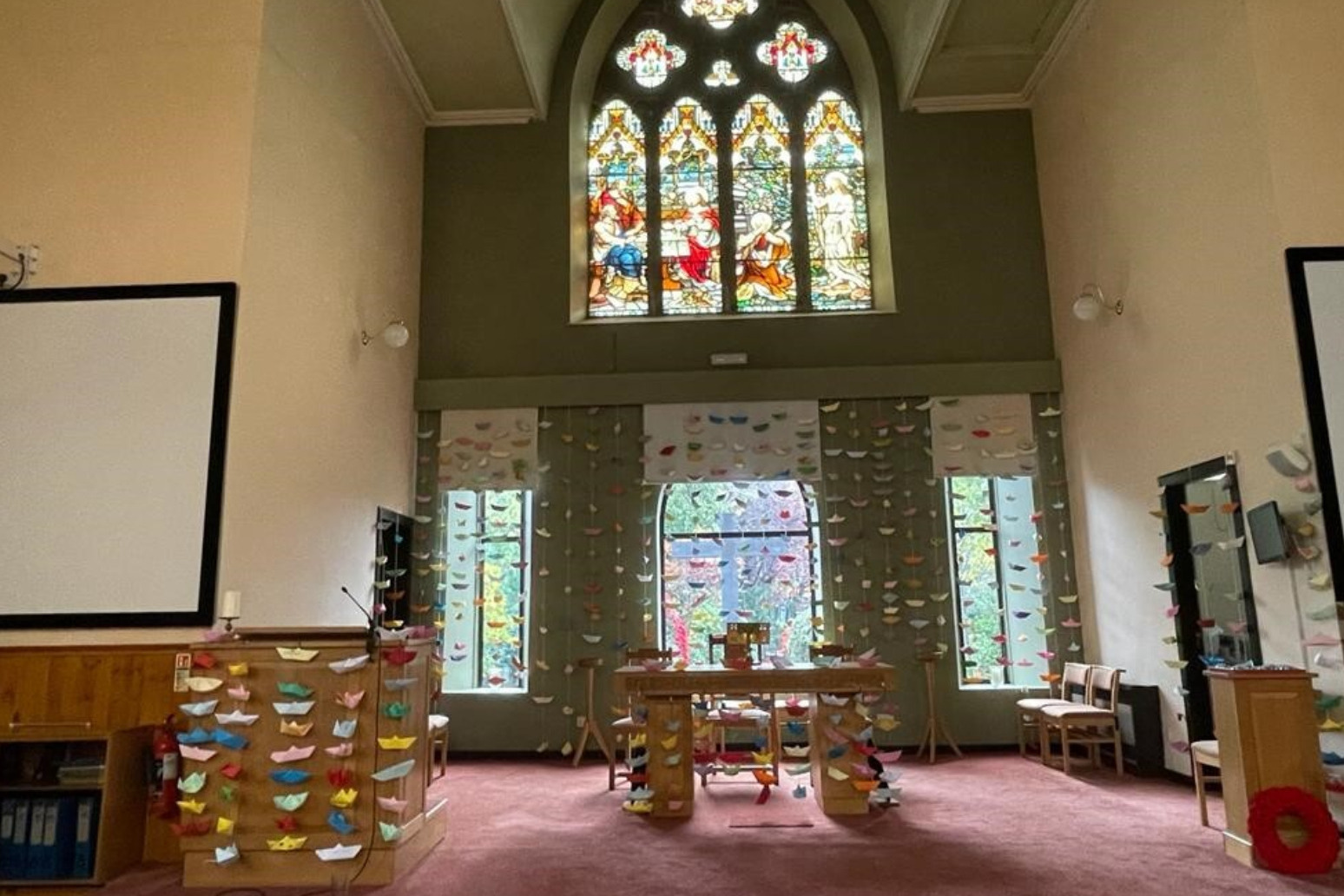 An aspiring minister has hung an origami boat inside a church in memory of her teenage daughter who died in a crash as part of an art installation.

Moira Taylor-Wintersgill, a probationer minister at St Andrews High Church in Musselburgh, East Lothian, made a pale pink paper boat with a message in it for her daughter Caroline who was killed in June 2015.

The Borders College student died after the car she was driving crashed into a tractor near Chirnside in Berwickshire.

Mrs Taylor-Wintersgill’s note is one of around 2,000 origami boats hung up inside St Andrews High Church and Northesk Parish Church in Musselburgh for an installation called “Love and Loss”.

Around 200 people from the congregations, the community and pupils from two primary schools, made the boats out of different coloured paper with many writing heartfelt messages about their loved ones, including family pets.

The project is part of a “Season of Remembrance” to recognise people who have died during the Covid-19 pandemic and in the months and years before.

Mrs Taylor-Wintersgill, who was living in Duns at the time of her daughter’s accident and later moved back to the Portobello area of Edinburgh where she grew up, wrote some of the lyrics to a song called She Is So Beautiful by the Waterboys on her paper boat.

The message read: “Caroline. She is so beautiful, light-filled, loving, and wise, with laughter dancing in her eyes. God hold you, my darling. Mum x.”

The former mental health support worker said: “The boat design felt very apt because life is like the ocean – sometimes it can be calm and serene and other times you are battered by the waves and tossed around.

“For me, grief is like that because sometimes you are sailing along OK then a freak wave can crash over the top of you.”

Mrs Taylor-Wintersgill, who has two other daughters, Claudia, 25, and Maisie-Grace, 10, said the tragedy prompted her to explore becoming a minister.

“After Caroline’s death I was in some pretty dark places but the sense of God’s presence in the hospital where she was in a coma for two days before she died was indescribable,” she said.

“There were moments in the weeks and months that followed when I just felt hopelessness and had no resources of my own left to keep going and it was at that point when I discovered a chink of light and hope in God that prevented me from sinking into complete darkness.”

She said taking part in a project that involves remembering Caroline is important to her, adding: “one of the worst things about losing a child is you have no new photos and no new stories and the thought of her memory diminishing and disappearing is hard to bear.”

Mrs Taylor-Wintersgill said the first funeral she conducted was for a young woman who was around the same age as Caroline.

“So much of what I had personally experienced helped me relate to her family and it is important to me that the life force of my child carries on in some way in the lives of others,” she added.

They said Musselburgh’s location on the coast and the town’s rich fishing heritage inspired the theme behind the installation.

The congregations received a grant to buy materials from bereavement charity Good Life, Good Death, Good Grief as part of its annual festival of remembrance, “To Absent Friends”, which ran during the first week of November.

Mrs Taylor-Wintersgill added: “The reaction and community support for the project has been overwhelming.

“Losing loved ones has been particularly hard for people during the pandemic because restrictions meant they were not able to support each other in the way that they would have liked.

“People were in hospitals by themselves and not allowed visitors and funerals were restricted in attendance numbers.

“This exhibition acknowledges all the hardships that people were forced to endure and provides them with an opportunity to express grief.”

The exhibition runs until this Sunday.