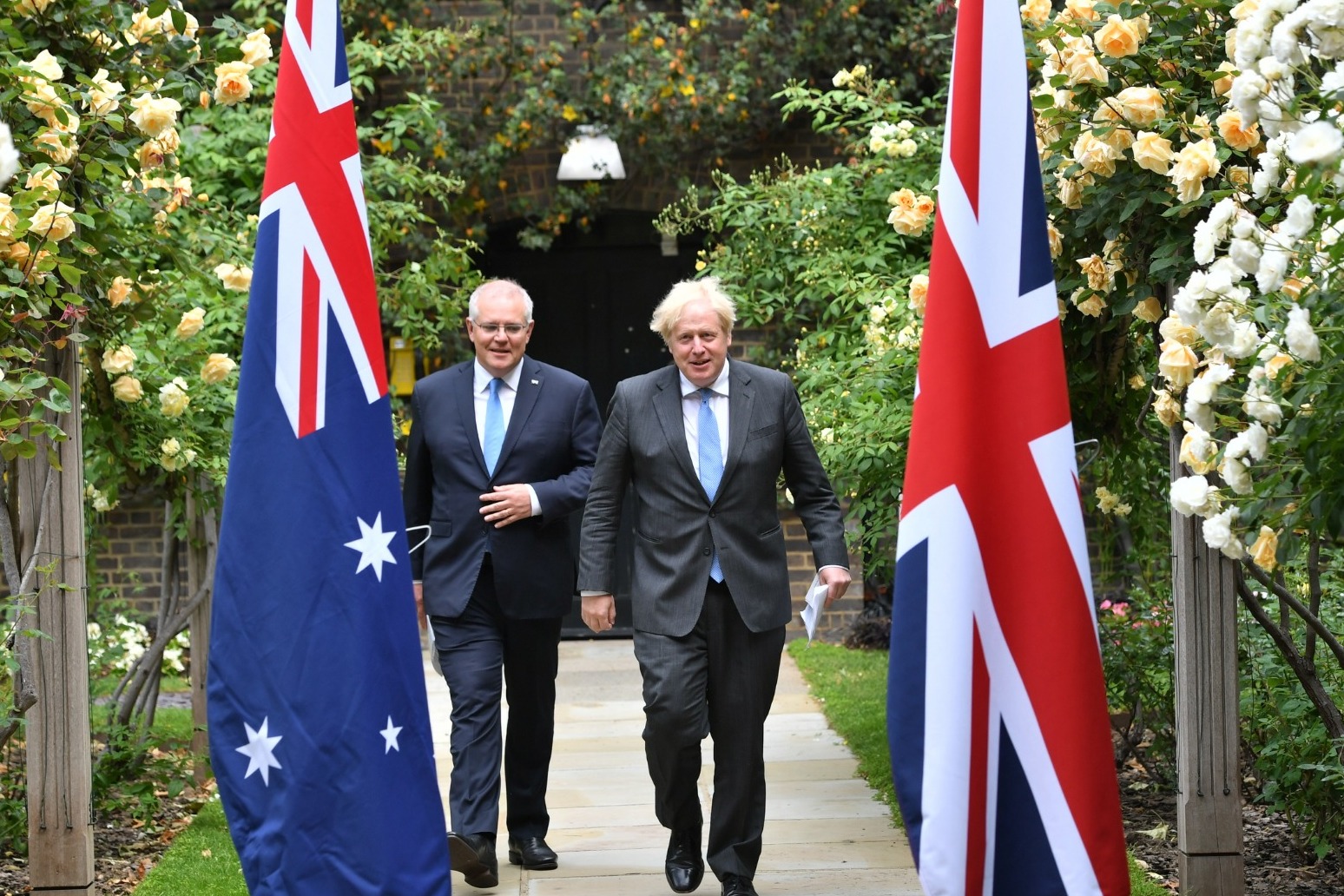 Boris Johnson has said the UK joining a trans-Pacific free trade agreement would unlock “unparalleled opportunities” as the Foreign Secretary begins three days of talks underpinning the Government’s “tilt” towards the Indo-Pacific region.

The Prime Minister said there was an “exciting opportunity to build on this country’s entrepreneurial spirit and free-trading history” as negotiations will formally launch on Tuesday over the UK becoming part of the Comprehensive and Progressive Agreement for Trans-Pacific Partnership (CPTPP).

The UK applied to join in February, and earlier this month the CPTPP announced that the accession process would begin.

Dominic Raab arrived in Hanoi, Vietnam, on Monday ahead of the accession process beginning on Tuesday.

The UK already has trade agreements with seven CPTPP members, but Mr Johnson said: “Membership of the CPTTP free-trade partnership would open up unparalleled opportunities for British businesses and consumers in the fast-growing Indo-Pacific.

“It’s an exciting opportunity to build on this country’s entrepreneurial spirit and free-trading history to bring economic benefits across the whole of the UK.”

The Government said CPTPP members have a combined GDP of £9 trillion, and it is hoped that joining the alliance would open up access to some of the world’s biggest current and future economies.

And the Government said CPTPP membership would lower tariffs on British cars and whisky, with tariff-free trade for 99.9% of exports.

The Government also said any deal would help British farmers sell beef and lamb into countries such as Mexico, as CPTPP countries would account for 25% of global import demand for meat by the end of the decade.

International Trade Secretary Liz Truss added: “This part of the world is where Britain’s greatest opportunities lie. We left the EU with the promise of deepening links with old allies and fast-growing consumer markets beyond Europe, and joining the high-standards Trans-Pacific Partnership is an important part of that vision.

“Membership would help our farmers, makers and innovators sell to some of the biggest economies of the present and future, but without ceding control over our laws, borders or money. It is a glittering post-Brexit prize that I want us to seize.”

Speaking ahead of the visit, Mr Raab said: “The UK is committed to strengthening our friendship across the Indo-Pacific.

“We are demonstrating this through our commitment to join CPTPP, partner with ASEAN (the Association of Southeast Asian Nations) and invest more energy, time and effort in our bilateral relations in the region.”

While in Vietnam, the Foreign Secretary will deliver opening remarks at the 5th Asia-Europe Meeting (ASEM) on the UK’s ambitions for its Indo-Pacific tilt to an audience of representatives from more than 50 countries.

Mr Raab will then travel to Cambodia to meet Foreign Minister Prak Sokhonn to set the UK’s ambition to bid for ASEAN dialogue partnership status ahead of Cambodia taking up the chair of ASEAN.

Mr Raab’s visit to Cambodia will be the first carried out by a UK Foreign Secretary since the British Embassy reopened there 30 years ago.

He will then continue to Singapore, with a meeting with Prime Minister Lee Hsien Loong to discuss geo-political security and climate change, as well as the international response to Covid.

The Foreign Secretary will also meet Foreign Minister Vivian Balakrishnan and address British and Singaporean business leaders from across Asia Pacific, highlighting the economic and strategic benefits of CPTPP and the UK’s wider trade and foreign policy priorities for the region.

The trip will be Mr Raab’s fifth visit to South East Asia since becoming Foreign Secretary, and it comes after the Government’s Integrated Review of Security, Defence, Development and Foreign Policy in March set out a “tilt to the Indo-Pacific” as Britain establishes its post-Brexit place in the world.

It also comes as the UK’s carrier strike group, led by the HMS Queen Elizabeth, makes its maiden visit to the region.