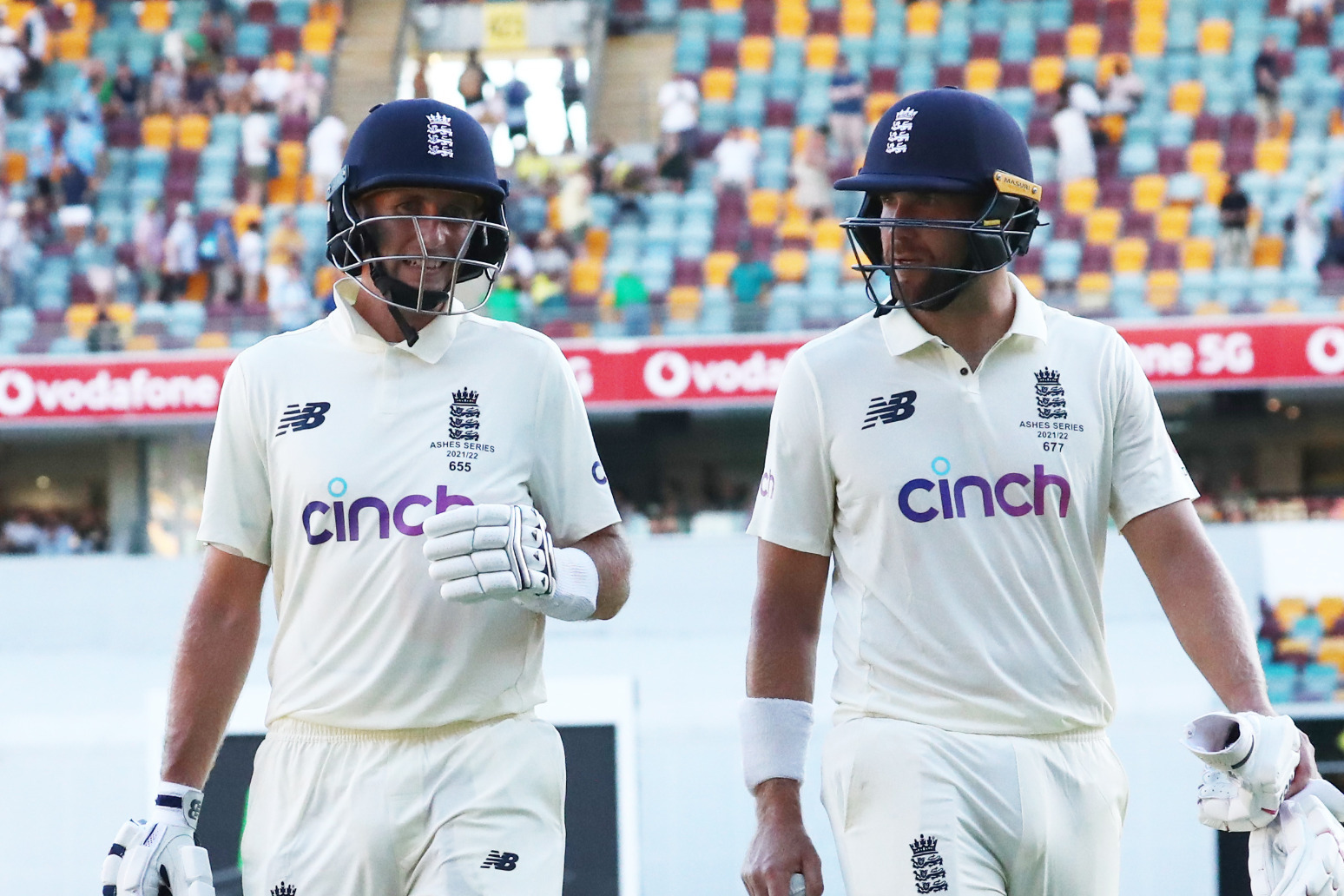 England trail by 58 runs at The Gabba

England captain Joe Root was celebrating a record-breaking 2021 as he and Dawid Malan dug deep to launch a brave fightback in the first Ashes Test at The Gabba.

After two despairing days at The Gabba, and a first-innings deficit of 278, the tourists finally landed some blows of their own to reach 220 for two on the third evening.

Dismissed for a duck in England’s underwhelming 147 all out, Root showed all his class and charisma to make 86 not out while Malan knuckled down for a highly impressive 80no.

Unlike Malan, Root has never scored a century Down Under but will spend the night dreaming of putting that right at the earliest opportunity as the duo resume their 159-run partnership.

While salvaging something from this match – a draw, the unlikeliest of wins, even just a measure of pride in defeat – would have been the only thing on Root’s mind, he scooped up a significant landmark along the way.

Until now no Englishman had ever scored more Test runs in a calendar year than the 1,481 Root’s mentor Michael Vaughan reeled off in 2002. But by the close he was sitting on a total of 1,541 and, with games at Adelaide and Melbourne still to come, he may have the Mohammad Yousuf’s world record of 1,788 in his sights.

England are not out of the woods yet, of course, but after a truly dispiriting 48 hours they have finally got grounds for optimism. Fans will not need too many reminders that an even bigger rearguard was launched at the same ground 10 years ago, when Sir Andrew Strauss, Sir Alastair Cook and Jonathan Trott all posted second-innings centuries to save a game that had looked to be gone.

The morning belonged to Australia, who resumed on 343 for seven and proceeded to add another 82 runs against a visibly weary attack. Travis Head, 112 not out overnight, had plenty more fun as he topped up his score with another 40, including a swaggering straight six off Ben Stokes’ second ball.

He was last man out when Mark Wood smashed the base of his stumps to leave Australia 425 all out.

Attention turned quickly to Rory Burns, who created an unwanted Ashes ‘moment’ when he lost his leg stump to the first ball of the series. He showed nerves by declining to take the strike – for just the third time in 55 Test innings – but almost bagged his second duck of the game anyway.

Shuffling across his stumps to his third delivery from tormentor Mitchell Starc, he was given lbw. Mercifully, DRS showed the ball sneaking over the top. He never looked secure, though, and had no answer other than a brush of the glove when Pat Cummins got to spit nastily.

It was 61 for two when Hameed flicked Starc off his hip and Malan could have been another early casualty when he left one from Nathan Lyon that zipped on and missed the bails by little more than a coat of varnish.

Root also had an early jitter, stooping to sweep the spinner and almost feeding the short-leg catcher. The counter-attack was about to begin, though, With Root unpacking his repertoire of scoring options against seam and spin alike.

Malan was less fluent but showed an iron determination to stick around and kicked into gear with a couple of flowing strokes off Lyon. At tea they were up to 107 for two, with Root dead even with Vaughan.

He moved past him with his first scoring shot but was only getting started. He bent his knee as he punched Starc through the covers, lent on an effortless straight drive and brought up an 80-ball half-century with a powerful sweep. Malan followed him to fifty as his resolute approach continued paying dividends and he indulged a rare flourish when he pounded Cummins joyously though extra-cover.

Root had his courage challenged as well as his technique, falling to his knees after wearing a lifter on the glove and then popping painkillers for a blow to the knee.

For the first time in the match Australia were searching in vain for answers. A stand of 100 eased past 150 without any real dramas, Starc expensive and Lyon still searching for his first wicket of the game.

As they walked off to roars of approval from the expat Barmy Army, Root and Malan had blunted their opponents for 49 overs with 10 boundaries apiece and renewed hope for their side.