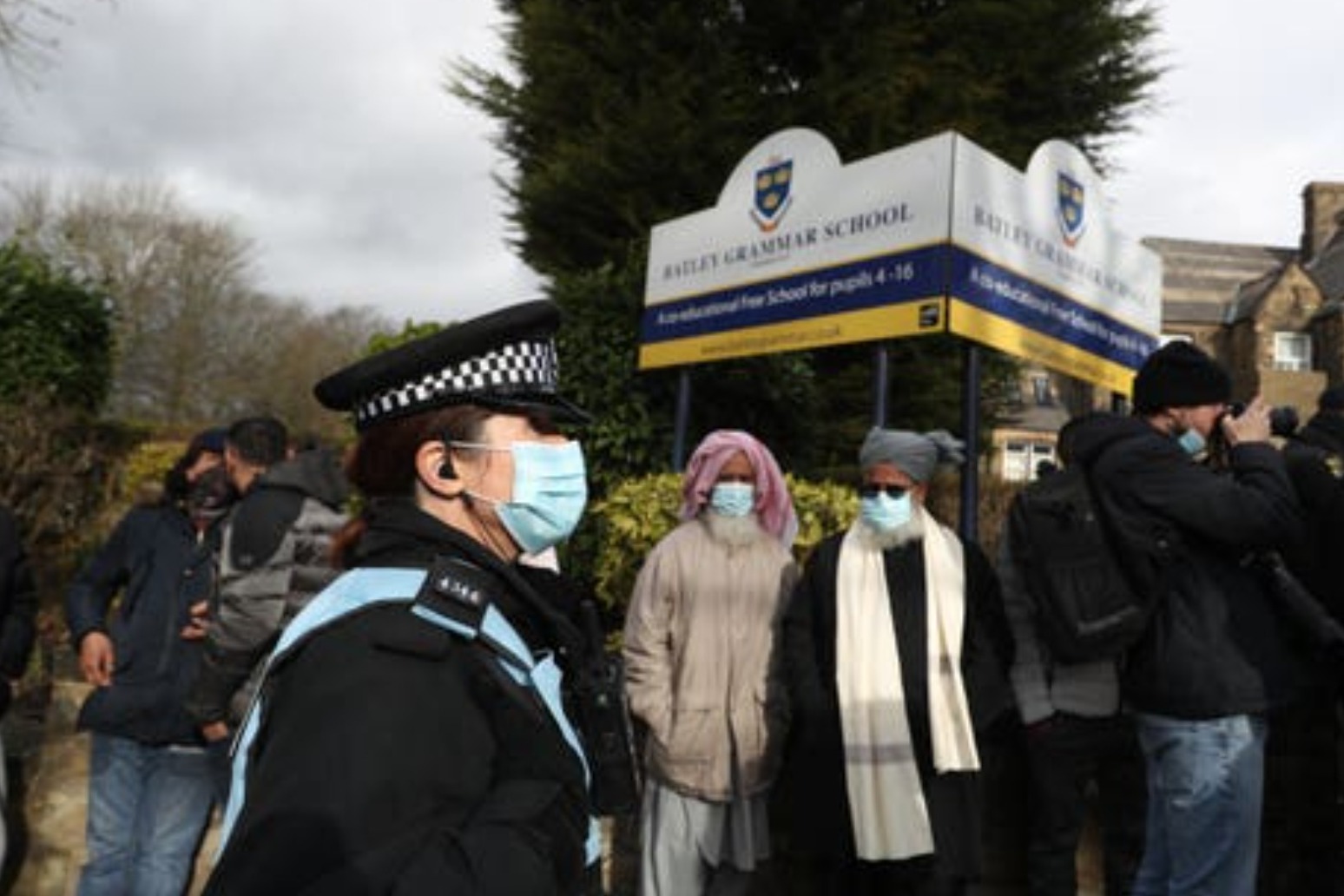 The Department for Education has been accused of amplifying divisions after a West Yorkshire teacher was suspended for reportedly showing a caricature of the Prophet Mohammed to pupils.

Protesters gathered outside Batley Grammar School in Batley, near Bradford, on Thursday, following claims a member of staff had shown students a cartoon deemed offensive to the Islamic faith during a religious studies lesson.

The school “unequivocally” apologised for showing “totally inappropriate” material to children, and said a member of staff has been suspended pending an investigation.

Pictures circulating on social media earlier in the day showed dozens of people stood outside the school gates, partially blocking the road.

In response, the Department for Education branded the protests “completely unacceptable”, and said they included “threats” and “intimidation”.

The department’s response has since been criticised by the Manchester-based Ramadhan Foundation.

Mohammed Shafiq, chief executive of the organisation, said the community rejected any violence or threat of violence, and said the incident “will now be hijacked by those who have an interest in perpetuating an image of Muslims”.

Mr Shafiq continued: “It is alarming that the Department for Education chose to amplify those divisions by attacking the parents and pupils rather than looking how we can come together to have a respectful discussion and seek an end to this issue.

“There is still time for calmer heads amongst the department and we urge them to seek language that brings us together and address the issue without deflecting.

“The education sector has a duty to protect the needs of all pupils and we are heartened that the school leaders recognise the pain and suffering caused by this incident.”

Mr Shafiq added that he condemned the cartoon “in the strongest terms” and was saddened that the teacher did not consider the hurt it could cause.

The DfE spokeswoman said: “It is never acceptable to threaten or intimidate teachers. We encourage dialogue between parents and schools when issues emerge.

“However, the nature of protest we have seen, including issuing threats and in violation of coronavirus restrictions are completely unacceptable and must be brought to an end.

“Schools are free to include a full range of issues, ideas and materials in their curriculum, including where they are challenging or controversial, subject to their obligations to ensure political balance.

“They must balance this with the need to promote respect and tolerance between people of different faiths and beliefs, including in deciding which materials to use in the classroom.”

West Yorkshire Police previously said they were called to the protest at around 7.30am on Thursday.

A police spokesman said the school road was closed for a short time, no arrests were made and no fines were issued.

“The member of staff has also given their most sincere apologies.

“We have immediately withdrawn teaching on this part of the course and we are reviewing how we go forward with the support of all the communities represented in our school.

“It is important for children to learn about faiths and beliefs, but this must be done in a sensitive way.

“The member of staff has been suspended pending an independent formal investigation.”